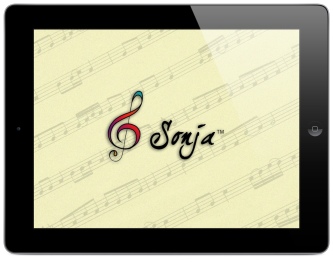 Some time ago (November of 2010), Dan Swirsky, creator of Choir Pro Software, contacted me about his software project, Choir Master. Choir Master was a Windows PC-based product that was intended to help choral singers (really, any vocalist) to learn their music, through an interaction of MIDI, recorded audio tracks, and even a video of the conductor conducting. As a Mac user, the program wasn't something that I would consider, and truthfully, I make my own resources for my students with music notation software. That software project has been discontinued and its resources invested in his next project.

Since that time, Mr. Swirsky has been in touch with me, discussing his dream of creating an iPad app. He was able to find a developer, and invested his own funds into the project. I was a bit skeptical of the app's purpose, as the goal of the app was to make a way for vocalists to enter music for rehearsal purposes without a lot of music knowledge.

Well, the app is out, and my skepticism has been proven wrong. Samuel Wright (an Australian music education technology leader) tweeted about a YouTube video. The video features a music technology instructor demonstrating how to notate a vocal part in a MIDI app without any “traditional” classical music concepts.

In watching this video, I realized something: most people don't have a background in music education, and most are musicially illterate (not an insult, just a fact). How are they going to transcribe music? By using music technology as demonstrated in the video; likewise, by using apps like Sonja.

Mr. Swirsky's app is called Sonja, and it is a free download on the App Store. It offers in-app purchases (and more will be offered in the future), but you can download the app and interact with it; all of its core functions are completely unlocked (the ability to export is a locked function; and I think that is a great way to let people try the app without giving it away for free). I'll let Mr. Swirsky's website describe the program:

Sonja™ is designed to help singers and musicians of any music reading level learn and practice music. Simply import a Sonja™-format file or a MIDI file, and the notes of each part are displayed in a separate tab on a music staff in what is called a notation track, where each notation track may be assigned a different instrument. The user practices his/her part by selecting the desired tab, while the notes of the notation tracks in the other tabs may be viewed transparently in the background or hidden, and their volume lowered or muted. When the user has learned his/her part, the user can mute his/her part and perform along with the other parts.

Sonja™ differs from other sheet-music or MIDI players in that it uses non-standard, visually-intuitive notation that is designed for singers and musicians who cannot read music well or at all, while acquainting users with the music staff, note timing and duration, and other basic music concepts.

I have had a chance to use the app, and it works. You enter the notes, and then put the notes to rhythm. This differs from the Dubspot tutorial video, as that video determines the rhythm first, and then changes pitches of the rhythm on a piano roll. Sonja reverses that sequence, and instead of using a piano roll, asks the user to enter notes on a musical staff. So, really, Sonja does build some level of music literacy above and beyond the use of a digital audio workstation with a piano roll. You can create multiple parts, each on their own “tab,” but each part also remains visible.

Sonja also can import MIDI and audio files, and the choralpro website offers a sequence of “how to videos” to help you learn how to use the program…which is easy to use. You can add text to your inputted notes (I'd more or less call this an “entered MIDI line”).

On a related note, I wish the iPad GarageBand app offered the ability to turn a piano roll into traditional music notation as the Mac version of GarageBand can do so; and if I had any wish for ChordPro, that would be my final wish…a line of “traditional music notation” on the bottom of the screen generated by your created MIDI notes…therefore building literacy. But that's the music teacher in me speaking, and there's a good chance that the average person wouldn't want that–or use that. Do look for future updates and additional in app purchases that add even more functionality.

I think this app is a tremendous success for Mr. Swirsky…it is so much fun to witness this as an outsider: he had a goal to make an app, found a developer, and now has an app in the App Store. Unlike a few recent apps, this app works (I experienced one crash with Sonja, but I haven't been able to replicate it). And as I stated earlier, the Dubspot instructional video tells me that this app has the potential to help a lot of people.

So..go download the app. It's free. Give it a try, and think outside of the box of the musically literate music educator. If you keep an open mind, you might find that your skepticism (if you had any) is also challenged.

2 thoughts on “Sonja – an app for learning choral music”