Today in its Twitter feed and blog, forScore announced its coming partnership with Musicnotes.com, where you will be able to pay for music and open it directly to forScore.  Yes…you could do this now, as Musicnotes.com allows you to download in unprotected PDF format–but you would have to go through several other steps to get the music from Musicnotes.com to forScore.  Let’s hope this is a beginning for a number of publishers–and that other sheet music and MusicXML apps will be able to benefit as well! 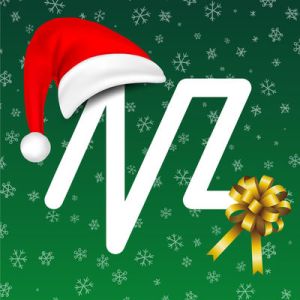 Newzik, a MusicXML and PDF music reader, is on sale through Christmas for 50% off of its normal price (referral link).  They are also including a collection of Holiday music to download for free.

Now…the telling question: do I use Newzik?  Not yet.  While Newzik handles PDFs and is consistently improving its app, I still lean towards forScore and unrealBook on a daily basis.  It is what I have used for the better part of eight years, and it is hard to leave a product until it can no longer do what you need it to do.

Why would you want to purchase Newzik?  Ultimately, Newzik is the next generation of music reader for iPad (and likely all tablets).  MusicXML is a better format for sharing music (as the MusicXML standard continues to improve) than PDF, because MusicXML file allows for changes in font size, choices of scores to see, embedded playback, transposition, and more.  Publishers (generally) aren’t sending out MusicXML files, but I continue to hope that they will start to do so.  Additionally, Newzik is working hard to develop relationships with publishers and is pursuing new models to allow for the use of MusicXML files from publishers.  And furthermore, music scanning only continues to improve (allowing you to make your own MusicXML files).

Again…why do you want Newzik?  Because it represents the future and what you are going to want to do with your music reading.  And…it is on sale right now.  Plus, you get free Holiday music.  If forScore or unrealBook didn’t exist, I could easily use Newzik in their place.  This is a great time to add this app to your collection.

Are these posts helpful to you?  If so, consider becoming a patron of techinmusiced.com at patreon.com/cjrphd.

Last year, my 1:1 iPad School decided to have every teacher use the free version of Schoology. The free version lacks a number of features–and as such, I kept using Showbie in my classroom even as I used Schoology.

This year, our district is piloting the full (enterprise) version of Schoology, which has a greater number of features. I am still using Showbie in my classroom–but at a much reduced level.

Showbie now calls itself a “light” learning management system. Originally an iPad app (and growing device agnostic year by year–a growing solution for Chromebooks, too), Showbie allows you and your students to share all kinds of documents–as well as to invite parents to see them. You can grade submissions in Showbie using a quick grading tool (I still had to transfer grades into Infinite Campus by hand). If a PDF is used in Showbie, either the student or teacher can annotate the document–which is a wonderful feature (Schoology currently only allows teachers to annotate). Showbie can also accept audio, video, GarageBand, and more file formats. Someone asked how a GarageBand file could be shared by a student or teacher…and Showbie is an option for that. There is a free version of Showbie, as well as a paid version. I have paid for the program for the past three years, with a renewal coming soon.

In my early days, students completed worksheets in Showbie, I used Showbie for their music (you can create a folder that only class members can access and upload music–and page turns are left/right and allow for annotation), and I eventually used Showbie for audio and video assessments. I would upload a PDF of a rubric and have students submit audio or video recordings (most recorded in class during an ensemble rehearsal), and later grade them using the rubric. I even had students assess themselves on a rubric (I cannot figure out how to do this on Schoology). I call this methodology a “light” approach to red note/green note software–my friend Paul Shimmons at ipadmusiced.wordpress.com uses SeeSaw and Google Classroom in a similar way.

Last year I moved away from having students write answers to daily questions in Showbie (from the S-Cubed Sight Reading Method) and instead used Schoology’s quiz feature (self grading). And this year, Schoology’s enterprise version allows students to submit audio recordings, and rubrics on Schoology work great (we are also using Schoology as a grade book and only copying end of term grades to Infinite Campus, our actual student management system). This year, rather recently, I have temporarily abandoned the written part of S-Cubed (sticking with the content and tasks)…so I am not using any system to grade written work.

I am still using Showbie for student music–and it is worth every penny of the annual subscription ($125?). Admittedly, for my current use, I wouldn’t need to pay–but the service is so useful (and we use it with so many students) that I want to make sure we are supporting the company. With Showbie as our music folders, I can easily send out new music, delete music (or an entire folder), and students still can flip left/right and annotate their music. Schoology can’t do that–yet.

How do I make sure students are using Showbie instead of messing around on their iPads? That’s a tricky question–but generally the answer is that I use Apple Classroom to monitor their app use. I could look at screens…but I figure if they are in the right app, that’s most of the battle. Some kids doodle throughout the hour on Showbie…but they would be doing the same with paper music.

Some readers may wonder why I wouldn’t use forScore, unrealBook, NextPage, Newzik, or PiaScore (free) with my students. There are two reasons. Showbie only allows my students to see their music, turn pages, and annotate. All of the other programs include too many options for my students–they press every button. Cost is also a factor. If forScore is $9.99 (worth every penny), it would cost 50% of that for an educational version of the app which can be withdrawn and reassigned). For my 300+ students, it would cost $1500 to get forScore on every iPad. Showbie is $125 per year. And finally, I love being able to quickly assign and withdraw music from a classroom “assignment” (it is really a folder). No other app has this level of management (although forScore has played with groups and Newzik is working on solutions). I should also add that Showbie is super-simple for students to use and to figure out. It isn’t surprising that Showbie is popular for all grades, K-12 (I don’t know a single math teacher would wouldn’t love Showbie). All of this may change if Schoology offers annotation and left/right page turns in the future.

Ultimately, what I want to convey is that we are in our 5th Year of 1:1 iPads, and due to external influences, my workflow continues to adapt to both available resources and the expectations of my school/district. If you have the enterprise version of Schoology…try in-class or out-of-class (band/orchestra) use of the audio recorder and a rubric for assessments. And if you are in need of a super-easy solution to digital music (not perfect, as page turns require swipes and there are no “hot spots” to allow for repeats or DC/DS markings) look at Showbie.

Are posts on techinmusiced.com helpful to you? If so, consider becoming a patron at patreon.com/cjrphd

This afternoon, I attended my final ukulele jam of the summer (we go back to school as teachers next week and begin with students after Labor Day). We hold our jams at local music stores, and I noticed a box on the floor behind the jam leader. After the session, I went to look at the box, and it was a Music Pad Pro! I’m assuming that it was new, although the box was a little worse for the wear.

If you don’t know about this device, it was a predecessor to the iPad–a very low powered Windows tablet that only ran one piece of software…the Music Pad Pro software. We purchased two of these for our new high schools that opened in 2009, one like this one for choir, and a super-sized one for band. This model was $899 when new. I did not ask what the current price was from the music store.

When the iPad was released in 2010, a few months after the high school opened, it became clear that the Music Pad Pro wasn’t the future, and I was able to sell the device (following school district policies). As far as I know, the band’s unit is still at the school! Here it is…

And here are the specifications from the box…

There were some features head of its time, such as a big screen (12.1″ diagonal), touch screen, rechargeable battery, and USB ports. Other specs are pretty funny years later…64MB of installed memory, and 64MB of RAM. In comparison, my iPad Pro has 2GB of RAM and 256GB of storage. Check out these ports on the bottom (and mounting points for a not-included stand mount):

Other information from the back cover (click to enlarge)…

I had my new iPad Pro (12.9)” with me, so I took some pictures…I need to clean the screen (apologies). I didn’t expect to be taking pictures of it today. The Music Pad Pro was just under 5 pounds. My iPad Pro, in its rubberized case is 2 pounds 8.6 ounces (also with the Apple Pencil attached to the case). 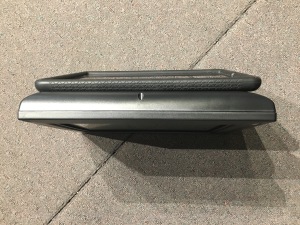 When I talk about the iPad and its disruptive force in technology–as well as the iPad’s excellent function as a music reader, I often mention the iPad Pro, and most people had never seen one. Now I have some comparison pictures to show people so they can see what I was talking about. As of August 2017, these are still selling on eBay for $175-$800…I don’t know why you would ever want one when you can now buy a used or refurbished 12.9″ iPad Pro…and the iPad Pro can run any number of apps, not just a music reader.

I have mentioned this before, but Aron Nelson (creator of unrealBook) has put together a very mice resource for PDF music readers.  He has expanded the forum with a few other tech tips for iPad users as well.

If you haven’t logged into the forum–please consider joining, and asking questions if you have them!

Technology in Music Education
Create a free website or blog at WordPress.com.