For this last post, I think it is worthwhile to mention some hardware tools that I use in a concert.  I will list them as bullet points.  I will not discuss our risers or shell that we use in our gym (we are building a new building, and next year, our concerts will be in an auditorium).

I forgot to take a photo of the layout from our concert on December 14th.  Sorry…this worked REALLY well.  Nobody realizes (you probably do) the time it takes to figure out how to set up for a concert in such a way that it results in a flawless performance.

So, to the hardware:

I play accompaniments using my ukulele (and in our second concert, with student players, too) and backup tracks that I have created (on Notion, iReal Pro, or GarageBand) directly from forScore, pushing the audio from my iPad to the PA system via Bluetooth.  It works wonderfully.  I also plan on adding an Xvive 2 guitar controller to my ukulele to project it through the system in the spring.  I also leave the iPad controlling the MV1 behind the shell, starting the video before the concert and ending it afterwards.

I also stop at one point in the concert to take a photo of the choirs for our yearbook (using my iPhone 8).  Otherwise, we never get all of the students in one place wearing the right apparel at the same time ever again!

I set up the sound system behind our shell, and control volume right off the iPad.  We have a mic system in the gym for speaking, so I just use that system to address the audience.  In the future, I would like to have students introduce pieces—but in the midst of getting everything else ready, that is something that usually slips by.

If you need any help creating such a system for your school, please, send me an e-mail.  While the initial investment isn’t insignificant…the equipment will last for years.

I hope you have found this series helpful and that there have been a few apps or approaches that will enable you to more successful prepare for your next concert!  Happy New Year!  I hope 2018 is a great year for you, your families, and your programs!

I have been using the PageFlip Dragonfly as a page turning device for the last week in class. The Dragonfly is a compact four-pedal hands-free device which I learned about from Matt Libera. I contacted PageFlip, introduced myself, and asked for the ability to buy refurbished model at a discount. PageFlip kindly offered a new model at a discount, knowing that I would be writing a review. I mention this in disclosure, as I know I am predisposed to have a positive opinion of products that are discounted or free (and if you are honest, you would, too).

As I mentioned in a previous post, I have owned several Bluetooth page turning devices, including the PageFlip Cicada, the AirTurn BT-105, the AirTurn PED, and now the PageFlip Dragonfly. I have shown these at conferences, blogged about them, and only used them in occasion. My workflow for the past seven years has been to work from my iPad from a piano, and then in front of a choir. Generally, I turn pages with a single touch (disabling turning by swipe, which I feel is too involved for normal use). On a rare occasion, I have used a pedal in performance, particularly when playing tuba. However…tuba music (at least in an ensemble) has two to three pages and page turns are pretty infrequent. All that changed last year as I incorporated ukulele into my teaching, and as I played with the choirs (while they sang). Suddenly I needed both hands, whereas if I was conducting, I was generally free to turn a page with one hand, particularly with an iPad. My device for the past couple of years has been the AirTurn PED. I like the PED, as it is small, and I also like that it works with Apple’s more advanced Bluetooth capabilities with App Direct support. Where I ran into problems was having two or more pages turn on me with a foot press–which even happened in our concert last spring. After the concert, I updated the firmware and still had issues. I even tried increasing the time between page turns via a pedal on forScore, but I was still flipping more than one page on a regular basis.

As I posted about previously, I don’t think this is a PED issue, I think it is user error with a heavy right foot that may not be letting up on the “page turn bump” in time.  The PED doesn’t use a physical “hinge” to turn pages.

And then Matt’s blog post on the PageFlip models came out in April and I couldn’t ignore the Dragonfly. I was unhappy with my page turning ability with the PED, and the potential of a foot pedal that could advance (or go backwards) a song in addition to a page was enticing. Eventually I contacted PageFlip and the rest is history.

I have now used the PageFlip for a full week of classes, and overall I am pleased with it. Unlike the PED, which uses Apple’s special Bluetooth functionality (note: you can make the PED work without it), the Dragonfly acts as a normal Bluetooth keyboard. Yes, I occasionally ended up with a double page turn–but this happened less often than with the PED. And there were a couple of occasions where I hit the top pedal instead of the lower pedal, progressing a song. What I have found is that it is best for me to use my left foot instead of my right foot to use the device.

I was also surprised to find out that Keynote for iOS, which I use for classes (warm-ups, sight reading, and announcements) functions with the Dragonfly, where the PED in the App Direct mode often does not work in Keynote. For the record, that isn’t the purpose of App Direct…but I want to mention it before anyone goes out and tries to make it happen.  I used the Keynote functionality of the Dragonfly quite a bit this week.  I didn’t previously know that Keynote could be controlled in this way, which is proof that there is always something else to learn.  On a related note, if you have the PED in mode 2, it too can control Keynote. 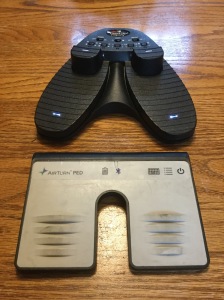 As a note…you do have to edit forScore’s settings to use the PageFlip, but if needed, you can also customize mode buttons on the PageFlip via a computer (and their program and a USB cable) to add further functions (e.g. Matt Libera suggests using it to enable annotation).  My thought?  If you have an iPad Pro and Apple Pencil (I don’t yet), annotation happens automatically with a lot of programs.  So I have not custom mapped the pedal yet.

I’m pleased with the Dragonfly, and I will keep using it…so, yes, I would recommend it to others. Aron Nelson, developer of unrealBook, says very good things about the Blueboard. And I still think that AirTurn makes excellent devices, too. Isn’t it wonderful to be able to choose between a number of good devices…and even to be able to own some of each?  If you buy a device, remember that it will outlast your current iPad.  The expense of a page turning device should amortize over time.  I have no doubt that my original PageFlip Cicada would still work if I still owned it, as would the BT-105.  My PED has been in use since 2015.

I had a delivery waiting for me after school today…a PageFlip Dragonfly.  It is a four-button Bluetooth page turner that is in a very compact package.  Years ago, I had purchased a PageFlip Cicada, a previous model from PageFlip, and have also been given an AirTurn BT-105 (since given away at a music conference to another music teacher) and the AirTurn PED.  I won’t get into specifics, but the companies aren’t a fan of each other, and at the time I was given a BT-105, the AirTurn pedal was a far superior device.

To be honest, my need for a page turner has been limited in past years, but as I now play ukulele most of the time in class, I need to be hands free.  I don’t know why, but for me, the PED often results in a double page turn, which has been devastating in rehearsal and performance.  I updated the PED firmware and changed settings in forScore, but the problem remains.  More about that later.

A few weeks ago, Matt Libera posted about the PageFlip models.  My interest was peaked by the four-pedal design of the Dragonfly (other four pedal solutions are much larger) and Matt’s conclusion that the PageFlip models have matched or exceeded the quality of AirTurn.  I don’t want to get into that discussion, but I did want to see for myself if I could make use do a four pedal system, what the “new” PageFlip models are like, and if my double page turn issue would resolve with a different foot pedal.

My first impressions of the Dragonfly are positive…it is big, but not much larger than my previous Cicada.  PageFlip has moved on from its prior “creaky” physical pedal, and there is something nice about physical on/off buttons, led lights on the pedals, and easy to select function buttons.  I don’t know how this will work in my life…but I will start using it tomorrow.  Now that I never carry a MacBook with me everywhere, I can handle the extra weight of the Dragonfly.  The PED, however, has been so easy to carry everywhere for the past years.

This may sound crazy, but I don’t blame the PED directly for the page turn issue.  The PED has a different type of page turning mechanism, sort of a bump, that I have issues pressing while standing up.  I think I may be hitting a second page turn while trying to press the pedal while standing and playing ukulele.  I think the older BT-105 might be a better solution for my case use–but the Dragonfly also approximates that larger-pedal use, plus adds the additional two buttons.  As a further note, I have the PageFlip set to turn pages forward/backwards with the big pedals, and to move from score to score in the set list with the higher second pedals.

I also have to state that I’m not going to take sides on what the better company is…PageFlip has clearly improved their product, and I use a variety of AirTurn products on a regular basis.  For example, the Go Stand and Manos tablet mount travel with me to every gig.

I will clearly write more about this pedal in the future after getting a chance to use it.  Until then, I refer you to Matt Libera’s recent post (which contains links to other things he has written about pedals).  Also: PageFlip products can be found at PageFlip.com.

I have been a supporter of AirTurn products for a long time, but I owned a PageFlip Cicada as my first page turner.   I didn’t have any issues with that device OR my AirTurn products (I bring my PED with me everywhere, even if I do not use it very often).

Matt Libera just wrote a fantastic post about all the new PageFlip models, including a discount code. I find myself tempted to buy the Dragonfly model.   Check out Matt’s fantastic post at: