As soon as the iPad was announced, it became clear that the device had all the potential in the world to be everything the Music Pad Pro (we own one at the school where I teach) wasn’t. Don’t get me wrong–I give a lot of credit to Freehand for being pioneers in the field and making a device that could replace sheet music. But as I’ve discussed before on this blog, the hardware itself never seemed to catch up with the concept. The Music Pad Pro is large, has seemingly poor resolution, and can only be used for one purpose. The iPad has a screen that is nearly as large as the Music Pad Pro, with much more internal memory (without a USB slot), has a higher resolution screen, seemingly operates much faster, the battery lasts 10 hours or longer, and in its most expensive format (3G) is still $50 than what we paid for the Music Pad Pro. I need to contact our IT staff and see if we can auction that device on eBay and buy an iPad in it’s place.

Both Freehand and one of their competitors (Music Reader) have written comments to prior articles on this site, and they are in the process of creating iPad applications, and I look forward to trying those applications.

One company beat all those other companies to the punch, and introduced ForScore, a PDF viewer and a metronome, for $2.99 about a week after the launch of the iPad (That pricing may have been introductory). Just today they released an update which solved some of the issues I had experienced, and another version with even more functionality is around the corner.

The program comes loaded with a lot of piano music, which might be difficult to read until you turn the iPad on it’s side. Then you can scroll down, and then tap the lower right or left hand corners of the page, or swipe left or right, to move pages. If you press and hold on the screen, you can type notes about the piece. If you tap anywhere above the bottom corners, the screen darkens a shade and the top menu items appear. The menu items allow you to choose a piece, use a metronome, and disable animations.

That’s about it. One person on the App Store commented, “All it is, is a PDF reader with a metronome.” Yep, that’s about it. Keep it simple and elegant. ForScore doesn’t have to worry about offering a specific library; that’s up to the user to figure out.

You can upload PDFs while tethered via iTunes, and the company recommends the addition of 8.5×11 PDFs in black and white. I’ve tried this feature with one of my choir’s songs (the screen of the iPad is the same size as a choral octavo). Ultimately, I think I will need to photocopy the music, making it slightly larger, then scan it, and then import it to iTunes. I have no fear of copyright; we own roughly 60 pieces of each song in our library, and instead of using the sheet music, I’ll use a digital copy instead, which I am not distributing. I’d like to see publishers offer a PDF of every sheet of music, with a license, just as what is offered by Masterworks Press.

Of course, music from the Choral Public Domain Library is often in 8.5×11 PDF format.

ForScore promises the ability to make notations in/on the music with their next version, along with even speedier page turns. I also want to see the ability to create “set lists,” the ability to quickly jump back and forth in a piece (or to use a slider bar), have the ability to edit the title/composer information of a song while in the application, have the ability to export an edited file with added notations in the music and the notes that may have been created. Having the ability to zoom in on score while making notations would be a useful addition, too..and if Apple will allow it, so would the ability to show the score through the iPad’s VGA connector, for the purpose of music education. I’d also like to see an embedded help menu or instruction manual with the app. The instructions appear when you open the app the first time, and then are impossible (at least for me) to find afterwards!

I really like this app and the developer’s commitment to improve the program quickly and to add new functionality. The company’s willingness to be transparent through their blog and Twitter accounts is also impressive. I’m excited to see where this app will go, as it is a perfect match for my occupation and my target audience (choir music).

If you have an iPad, and you are a musician (or music educator), buy this app. 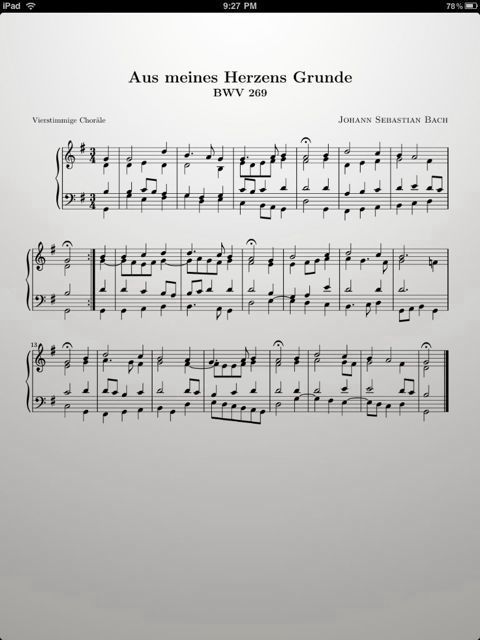 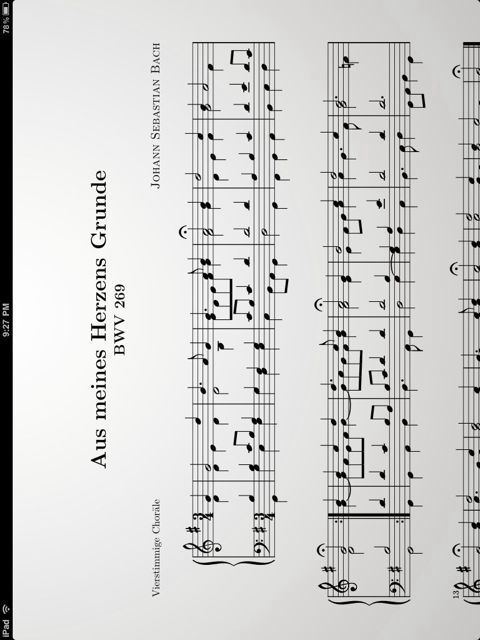 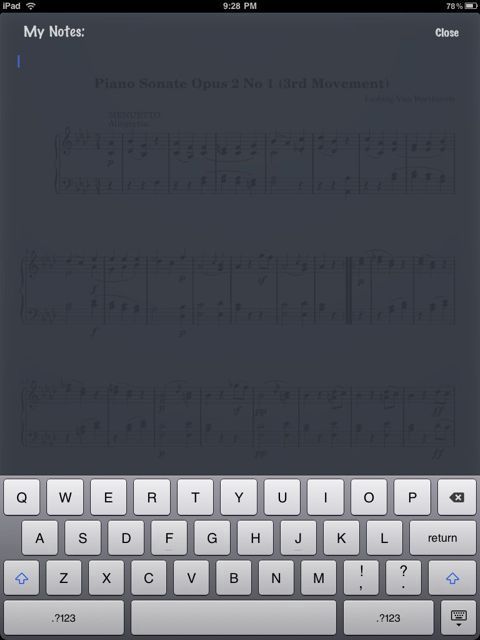 I won’t say much with this post, as I am working towards obtaining an iPad (more info about this later)…but one iPad application for music is already being written about by the Apple Blogs: ForScore.  Check out their webpage.

Please note that both Freehand Music and Music Reader have stated that they are developing iPad applications.

It will be interesting to see what the impact of the iPad will be for music education.

To the leadership of MakeMusic and Sibelius:

I’ll be honest, I’m disappointed in your companies.  Don’t get me wrong: I love your software and what it does for music, and in addition, what it does for music education.  Your programs have advanced so much over the past years, particularly in terms of ease of use, better and more realistic playback, and more reliable scanning music.  I admit that I’m a long-time user of Finale, since 1988, and that I love that Finale is a Minnesota-based company.  I don’t hold any ill will towards Sibelius and can recommend it freely (with the exception that Sibelius can’t natively export a MusicXML file…what’s with that?).  I also love Finale’s integration with SmartMusic, a real win-win situation for music education.

However, you’ve both been asleep at the wheel.  There’s this little device on the market known as the iPhone and the iPod Touch.  Have you heard of them?  Estimates say that over 30 million iPhones have  sold since their introduction, and all of those phones can run the current iPhone OS, and it seems that Apple is committed to making OS improvements retroactive to the original iPhone.  In addition, estimates say of 40 million iPod Touches have sold as well.  That’s a market of 70 million devices on the iPhone OS.

As a teacher of secondary students, I am finding that more and more students have either an iPod Touch (most likely) or an iPhone.  In some classes that I’ve asked, over 80% of the students have one of the devices!  Even if 30% of high school students have an iPod Touch, what does that tell you about the market?

So, here’s my question: “Where are your iPhone OS Applications?”  There are a plethora of iPhone music applications available, and I’ve reviewed a number of those applications on this blog.  However, there is not a single good (acceptable, user friendly, plain usable) music notation application in the Apple App Store.  And a message to MakeMusic: there’s no app for SmartMusic as well.

I know, for a fact, that these devices could handle a basic music notation program that could then be uploaded into the full versions of Finale or Sibelius.  And I know that any iPhone, and all 2nd Generation (or later) iPod Touches could handle a version of SmartMusic.

Now we’re days away from the introduction of the next Apple product, the iPad.  I just wrote a post about how the iPad could revolutionize music notation software (an embedded keyboard on the multi-touch touchscreen).

So here’s the challenge, MakeMusic and Sibelius: it’s time to take advantage of the iPhone OS, iPhones, iPod Touches, and the iPad.  It’s a huge market where you will be able to build a larger customer base as well as customer loyalty.  Yes, you may have to sell the applications for less than you’d like, but in the case of a SmartMusic application, you still would collect on the annual subscription fees from students.  And as most people will want to work with their music notation files on a desktop as well, most users will eventually purchase your desktop app.  It’s a win-win.  Make it happen.

One final harsh statement for MakeMusic in regards to SmartMusic: As a choral music educator, I’ve been saddened by the lack of attention you’ve given the choral field lately, when your program works perfectly well with the voice.  I understand that you’ve put a hold on the addition of new repertoire, as you try to figure out how to incorporate the onscreen music with tradition SmartMusic Files and the ability to add tradition audio tracks as well.  I know that I can make my own files in Finale and import them to SmartMusic, but if I do, I cannot add an audio track.  And if I import an audio track to SmartMusic, I cannot add the onscreen music that Finale can generate.

Please get working on choral music repertoire…updating the catalog for onscreen music, allowing for the addition of new repertoire, and allowing users to add both Finale Files and audio files (at the same time) to SmartMusic, to make our own choral rehearsal files, as you are doing with the Band repertoire catalog right now.