﻿If you follow the tech news, you will see nothing but negative news about Apple these days.  Stock is currently trading around $90, every product is being called a failure, not innovative enough, or boring.  Every eductional article lauds the Chromebook and its success in education.

You might as well tell Apple to close their doors and go home.

While the stock price is not a good thing for investors, the company itself is plugging along.  Apple introduced a smaller iPhone (remember when EVERY tech journalist demanded larger phones?) which is still backordered, introduced the small (9.7″) iPad Pro, and refreshed many of their notebook computers, including the controversial 12″ MacBook which in the minds of many tech journalists, has both gone too far (One USB-C Port?  Burn down the Apple stores) and not far enough.

And it is a very quiet cycle in new products and apps.  Most companies scale up to CES (January) or Winter NAMM (also January), and we are really in the “calm of the storm” before Apples WWDC, where developers will learn what iOS 10 (if that is what it will be named) will bring and start programming for the eventual device releases in the fall.  I am waiting to move to the (12″) iPad Pro until the fall.  I saw one again last night at Best Buy and continue to be amazed by the sheer size of the device.

In this relatively quiet time of the year, it has been fun to see some apps that were previously web-based (I.e. Chromebook friendly) make it to iOS.  One of those apps was SoundTrap.  Another is a recent release of a popular music web app called Incredibox.  Incredibox was a Flash-based app, so it wouldn’t work on iOS.  The iOS app was released at the end of March, and already has had four major updates.  It is available for $2.99, and can be bought with educational pricing for $1.49 in groups of 20 or more.  I love seeing a previously web-only app make its way to iOS, just as I love seeing iOS apps move to Android and Chromebooks (There is some speculation that Chromebooks will soon run Android apps.  We will need to watch that development).

Incredibox is basically a looping app, where a group of guys are on a screen, and they make different looped sounds based upon the articles of clothing that you drag on the figure.   On the iOS app, if you don’t like the sound, just drag the clothes off the character. 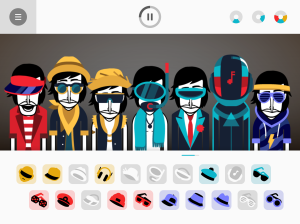 As a choral and band educator at the secondary level, I struggle trying to integrate looping apps of any kind (including GarageBand) into traditional performance classes.  But I do know a lot of educators that like to teach with such apps (e.g. Disco Fingers, GarageBand)–and I know a lot of musicians who love to practice and perform with loops.

What I can tell you is that Incredibox is incredibly fun to play with, and the iOS app works perfectly.  If you would like more ideas about how Incredibox can be used in your classroom, I would simply forward you to posts on the subject by Katie Wardrobe (link) and Amy Burns (link).  Just remember that you can now purchase Incredibox for iOS, too.