Have you taken a moment to look at the iOS app catalog lately?  Or if you have an iPad, have you looked on your iPad to see how you are doing with available memory?

A quick look at my iPad shows how 3 music apps take up 4.2 GB of space on my iPad: 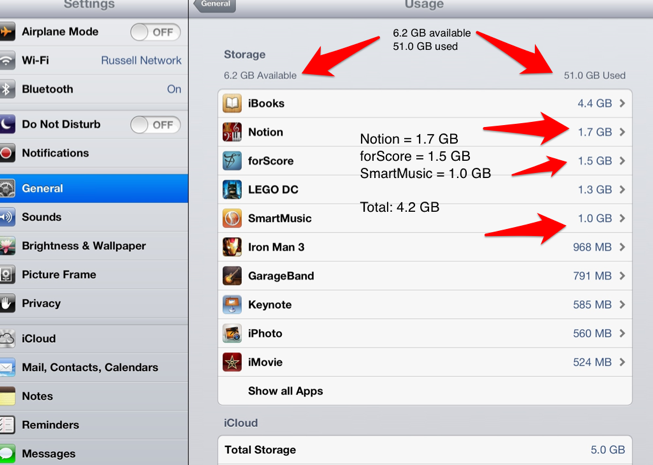 In contrast, Notion for iPad is a huge program, weighing in at 1.6GB.

Now, just because an app is large doesn’t mean that is is bad.  But what it does mean is that if you (or your school) buys 16GB iPads, it won’t be long before those 16GB are used up.  It makes a lot of sense to me to spend $100 per device and to give yourself some additional breathing room.  Personally, I’ll buy a 128GB iPad the next time around.

I know many Android fans will say, “We have SD card slots on our devices, so we’re not limited by that.”  But the truth is that Android users then have to manage where things are stored as they are installed, and should they remove that SD card, all kinds of potential issues arise.  In the education field, the fewer ports the better, and the fewer things to lose (SD cards, for example), the better.  This is probably true in every market, not just education.

I’m hoping that Apple will drop the 16GB iPad when the 5th Generation iPad is released, and upgrade the iPad line to only offer 32GB, 64GB, and 128GB versions (I would also consider a 256GB iPad).

I’ve been recommending the purchase of 32GB (minimum) iPads since 2010; and all of my iPads–to this point–have been 64GB devices.  If you–or your school–is considering iPads, and you can make it happen–get the 32GB devices.